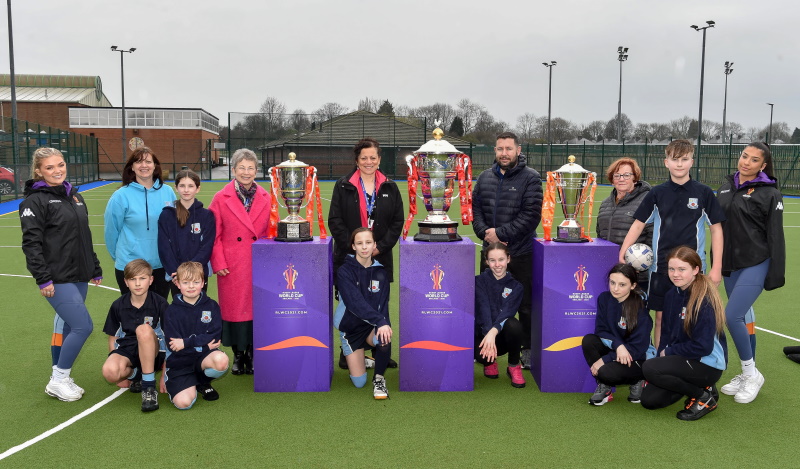 A sports pitch at a St Helens secondary school has been given a new lease of life after undergoing a £107,000 upgrade.

For four years, St Augustine of Canterbury’s astro turf pitch had been out of use after falling into a state of disrepair, with the surface deemed unsafe.

Since taking over the reins in 2019, headteacher Giselle Lynch was determined to bring the facility – used by the school and local community sports teams – back into use, a feeling shared by St Helens Borough Council which lent its support to get the project up and running.

Though a collaboration between the school, local authority and Rugby League World Cup 2021 as part of a CreatedBy capital grants programme – dedicated to giving people more and better opportunities to engage with the game of rugby league and to get active – funding totalling £107,000 was secured to resurface the pitch, complete with fencing and floodlights.

As the sand-based pitch was officially handed over last Friday (11 March), school staff, pupils and governors were treated to one more surprise – a visit from all three of the RLWC2021 trophies which were in the borough as part of a tour to promote the tournament coming to England later this year, for which St Helens is a host venue.

Commenting on how much of a difference the new and improved pitch will make to the school and wider community, Giselle Lynch said: “Since coming to the school, one of my main priorities was to get our artificial sports pitch back into use, a desire which was supported by senior figures at the council who have been most helpful in securing the funds necessary to do this.

“We’re delighted with the outcome which complements our changing rooms which underwent a refurbishment in 2019, and pupils can’t wait to start doing PE lessons on the new surface – while we’ve also got interest from local sports club about training here too.

“To have the Rugby League World Cup trophies on display for the handover was a nice touch and really capped off a special day for our school.”

Jon Dutton, Chief Executive, RLWC2021, said: “The CreatedBy RLWC2021 Capital Grants Programme is focused on ensuring the next generation of rugby league players have the best possible experience and barriers to participate are removed. We are delighted to award this grant to St Augustine’s and look forward to seeing the results of this investment that aims to deliver real change in their community.”

Ways to Work employment and training centre opens in Earlestown