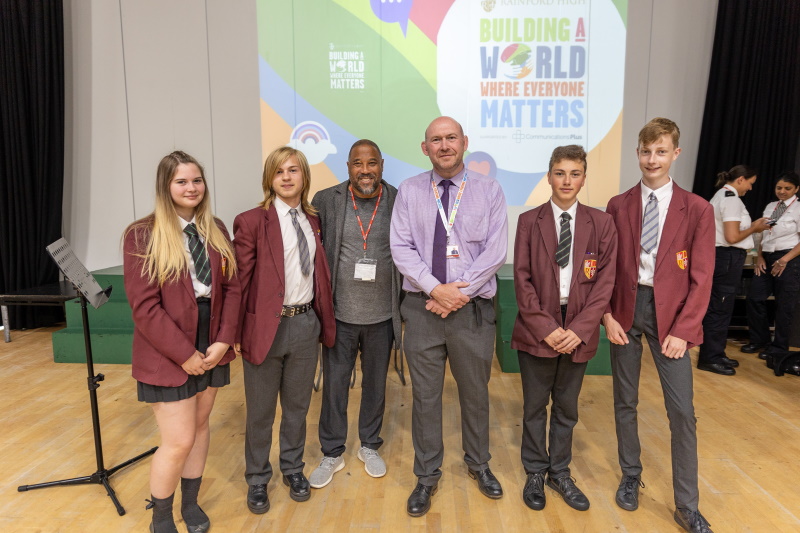 On Thursday 14 July, Rainford High held its conference ‘Building A World Where Everyone Matters’ which celebrated diversity, whilst also raising awareness about the issues surrounding the topic of inclusion.

The conference, supported by Communications Plus, took place at the school on Higher Lane and activities lasted all day. A variety of guest speakers were invited to talk to students about their own experiences regarding diversity in their lives and careers. In addition to this, multiple workshops took place throughout the afternoon that were led by students from participating schools. Around 140 students were in attendance.

Following an introduction to the event from the school’s principal, Mr Ian Young, John Barnes MBE took to the stage first to discuss his experiences with racism as a footballer. He recounted incidents to exemplify this including times where football fans would throw items at the coach, directed at him, shouting racially abusive terms. John explained his mindset in dealing with this abuse.

Christian Owens, in his own words, used his “lived experience to educate”. He took the audience through his journey as a transgender man, beginning all the way from childhood and spending time focusing on his time at school as to show his understanding to any students in the room who could relate. As somebody who served 27 years in the police, Christian also discussed how inclusive the force has now become. Christian’s main messages to the students were “be proud and visible” and “be your true authentic self”.

B-side founder, Walé Adeyemi MBE, talked about his career in fashion design and how he began with no self-belief but is now a confident, successful fashion designer who has worked for clients such as Victoria Beckham and Beyoncé. Walé explained that by following this career path, he was subverting the expectations of Nigerian culture and his parents who expected him to pursue a field such as law or medicine.

Paula Barker discussed the importance of “speaking up for the voices that aren’t usually heard” as she talked about her role as a woman in politics representing a predominantly working-class community. She gave examples of the sexist discrimination that she has faced including verbal abuse online targeting her appearance and described how her male colleagues do not face a similar type of abuse. Paula emphasised the urgent need for diversity in parliament.

Mr Ian Young said: “Today’s conference ‘Building A World Where Everyone Matters’ was absolutely wonderful. I would like to say a huge thank you to our special guest speakers for being here and taking the time to share their stories with us. I am sure that students and staff alike left the school feeling very inspired.

“At Rainford, we understand the importance of acknowledging and celebrating diversity as well as ensuring that both pride and self-esteem are instilled within all of our students. Thank you to the students from our partner schools for their hard work in hosting workshops that were very beneficial in exploring diversity to a deeper extent.”

Mr Young added: “I would also like to thank Communications Plus for supporting the event. We are very grateful for the local business’ help and our students have had the opportunity to learn so much.”